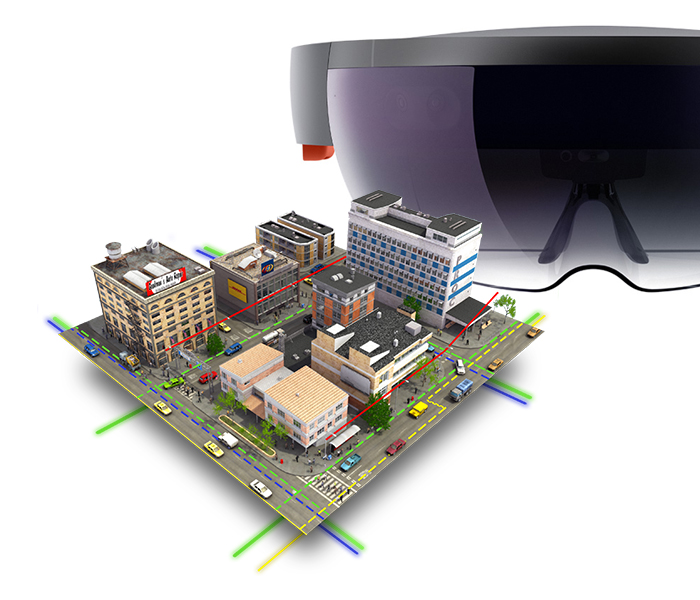 Allow Field-workers To “See Through The Ground”, And View The Utilities Beneath Their Feet Without Having To Rely On Vehicle-mounted Rugged Laptops.

Augmented reality works by merging the physical world with computer-generated objects, allowing a field technician to have a consolidated view of the physical workspace overlaid with virtual equipment and line identifiers.

TRMUA had already built a robust geographic information system (GIS) using ESRI’s ArcGIS online services. The utility infrastructure maps and supporting data were accessible in the field on laptops. The utility was ready to take the existing GIS to another level of dynamic mapping and data retrieval. He wanted field technicians to be able to “see” objects that are normally concealed: wires cutting through treetops, cables situated behind natural and artificial obstacles, underground piping. This new level of awareness held the promise of reduced work times, improved safety, and greater accuracy of field data. The ability to work hands-free would further magnify the benefits of such a system.

With the data infrastructure in place, attention turned to the user experience of the field technicians—how the wealth of data could be better managed with a combination of hardware and software to deliver an intuitive interface, one that took advantage of new presentation technologies such as virtual reality and augmented reality. Mixed reality was the perfect environment for allowing his fieldworkers to see concealed utilities while remaining situationally aware of their actual surroundings. TRMUA selected Toronto based Meemim vGIS as its platform of choice to enable the technology integration between ESRI’s ArcGIS, Microsoft Azure and Holo Lens. Meemim specializes in meeting technology needs of municipalities and utility companies.

Meemin chose the Microsoft HoloLens as the smart glasses TRMUA would use. The head-mounted holographic computer was the only viable device that met all TRMUA’s functional requirements. Plus, it would be supported by the largest network of hardware and software technicians and developers at Microsoft. Esri’s longstanding partnership with Microsoft factored in, too, since TRMUA has been an enterprise client of both companies for many years. It helped that several of Meemin’s programmers were already experienced in working with Unity, a development platform used to create 3D worlds for many online games, the startup chose that as the simulation engine. Finally, there was still the challenge of developing a way to digest TRMUA’s ArcGIS features—surveyed coordinates, data, and projections.

The company successfully created its app, called vGIS, which could process ArcGIS feature services, upload the output to Meemim’s Microsoft Azure cloud service, and communicate directly with HoloLens to create the holographic projection of underground utility features from the perspective of the headset wearer’s location and orientation. The next challenge was field testing this newly eveloped innovation.

The client’s main concern was whether the Microsoft HoloLens could accurately project and display TRMUA’s underground GIS features—which were field surveyed and post-processed to sub-decimeter accuracy—so the wearer would see them aligned with the real world.

“We are dealing with five or six utility lines underneath a street. “We have to locate our utility lines so that when we dig up a street, we are confidently aware of all other utilities around us. Given a more dynamic situation—a car hits a telephone pole, the pole collapses onto the street—seven separate agencies are on scene, each viewing own GIS utilities on separate devices. What (we are) trying to do is provide all field personnel with one common interface to see all underground utilities beneath their feet— one shared vision via a shared interface.”